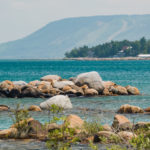 The Town of The Blue Mountains has proposed the development of an Attainable Housing project on Highway 26/Arthur Street East at the old Foodland site in Thornbury. The BMRA recognizes the need for Attainable Housing in TBM and sees the identified site as appropriate for this use. The mixed use with Commercial and Residential is in keeping with the Town’s Official Plan, and in keeping with the Downtown commercial / residential feel.

Our Association does have two broad concerns with the proposal – the potential for the development to require variance from the Town’s Official Plan, and the financial model proposed.

1) Variance to the Official Plan

Consistent adherence to our Official Plan (OP) is critical to maintaining the character of our community and has been a commitment stated by our current Council. Historically, TBM Councils have not been steadfast guardians of our OP.

The TBM OP references height limits as 11m and/or 3 storeys in several locations, including the below:

Without the details of a project against which to measure these and other conditions, Council is not in a position to say it is satisfied that the 11 m maximum height limit should be reached, let alone exceeded. We believe it is premature for Council to consider zoning and official plan amendments at this time.

The BMRA does not believe that sound rationale has yet been established to suggest that allowing this project to exceed the three story / 11m height limit is warranted. Our concern is that if this OP variance is granted to allow for a four or five storey building, it would be difficult to prohibit developments in the future that request approval to exceed three stories. We would need to be reassured that such protections could be established and enforced.

We also believe that constructing a four storey, or more significantly a five storey building, would present an imposing presence at the west entry to Thornbury that would not be in keeping with the current character and feel of the town.

It is recognized that a public survey was conducted, asking for town resident responses to the conceptual designs (which we know are not binding) and to provide their perspectives on three, four and five storey options. The results showed a fairly even split across the three options, although it did not appear respondents were clearly informed that the four and five storey options would require variances to the Official Plan, nor were the trade-offs between more / less parking, more / less tree cover thoroughly explained. Responses were not segmented by location of the person providing their input, so it is not possible to ascertain whether those in the Thornbury area, who will be more exposed to the development and the impact on their community, had a different perspective than those residing in other parts of TBM.

Finally, we would like Council to consider amending the OP to incentivize affordable or attainable housing that can be integrated within private sector developments throughout the community.

Ingoing expectations for the Attainable Housing project were that it would be structured as a public / private partnership, with the Town offering incentives – such as waiving of Development Charges – to deliver a viable return to the private partner. Our understanding now is that the Town will be assuming all financial risks, particularly as it pertains to the revenue stream provided through commercial and residential rents, and the design/builder will simply be engaged with a cost-plus construction agreement. The Town’s lack of experience with this kind of financial structure causes concern about our future exposure, and the risk that taxpayers may be on the hook to help fund any potential shortfalls.

Regarding the Global Hospitality Proposal, we strongly urge the Town to help resolve the question of future school needs on the site before any future residential use of the property is considered.